I know that I was enough lucky to get a chance of becoming a volunteer with Birthright Armenia and Armenian Volunteer Corps (AVC) for the second time. That means sharing more experience, learning new things, meeting different people.

This time I didn’t want to stay in Yerevan meet some tourists because Armenia is not just Yerevan; it is all the places from Gyumri to Martakert.

My First night in Yerevan

I arrived at 2:00 am to Yerevan, the driver told me that I had to go to Gayane’s home. When we arrived there, we knocked the door but no answer. After a few minutes a young man and a boy opened the door. That was Araz, another volunteer and he said “We didn’t know about you” Gayane woke up and said “Oh who are you?” I said I am a volunteer too and she was surprised… Anyway she was a very nice lady, and, after all, this was the first night after a long time, that I fell sleep with no voice of bombs and arms.

So my first step was to go to Gyumri. It is a very nice and ancient city — you touch the culture, the history, and also the pain and unforgettable sadness caused by the earthquake. I had to do something I have never done before working in an NGO called Youth Initiative Centre (YIC). I can’t forget the first day when I had to go to my work place all I knew is that I had to stop the Marshoutka in front of the old town hall. All the people in the marshutka knew that I was a newcomer and that I wanted to go to the old town hall, because I was keeping on asking the driver where we were and whether I had to get off there. In the end, he refused to take money from me. He said, “Du Hyur es estegh, patk chi vjares”

Nelly, Arthur, Gurgen, Anni, Tamara, Kert at YIC… we used to spend all the day together having lunch together which I will never forget, especially eating watermelons.  I learned so many things from them: I learned how to make others smile, how to bring joy and happiness to others, I learned how to help and love,  to create things with  small opportunities, I learned how to give while I had nothing and to feel that happiness and the satisfaction inside when you feel the people you feel their pain and bring a piece of smile to them.

Narine, my host sister, was a mother of two children, Hagpig and Ashotig — my host nephews. They were amazing! It was Hagopig’s birthday when I took him to the kinder garden with Narine all the children there knew about me. Narine and I used to sit at nights and share our issues, our dreams and traditions.

During my childhood Artsakh was inside me. All I remember about Artsakh is a video of the Armenian Soldiers who were fighting in Artsakh war and the songs of my Ante (she used to sing patriotic songs). I also remember how everyone used to joke of me when I was telling them I would become a soldier in the future to keep my homeland safe…

I was told I would work with a lady called Susanna Petrosian in Artsakh Youth Development Center and live at her house. Susanna was a nice lady; I used to teach English and organize round tables discussions. I met many young people there. Susanna had three children — Valero Maria and Ovsana, who were all  so kind! Marian, who was 7 years old, used to teach me Russian words.

After 10 days I met Liliane de Cermadec , a producer from France and her work team. She told me they needed a translator and invited me to work with her. While I worked with her I had the chance to visit every place in Artsakh and be closer to my homeland. I will never forget Elada when she told me that they lost their three sons during the war. They were soldiers and the first one died in the prison in Baku. I don’t know if crying or shouting or even whining was enough to explain what I felt inside. END_OF_DOCUMENT_TOKEN_TO_BE_REPLACED

The reason I took months to start writing my first blog was because I simply didn’t know where to begin; I’m completely lost for words and at the same time I feel like I’m going to burst because I have so much to say, so many stories to share; it’s a strange feeling. My experiences were brilliant, unique and unforgettable (These words are such understatements). I’ll simply say that those 18 weeks in Armenia were the best times of my life. I took some 22,000 photos and over 500 videos, which I go through partially everyday, so I could re-live my time in Armenia and be able to bare the distance until I can return again soon.

Having said that…I still don’t know where to begin.

I was very excited to be coming back to my fatherland for the second time; I remember sitting in the plane thinking about Gayane and Avetis (Avo), my homestay mother and brother to be. I was thinking about how it would be to live with total strangers for months. What if we don’t get along? May be I should have gotten my own place? Then I started thinking about my work placement. I got so excited; I couldn’t wait to see what they had in store for me. I was assigned by Jenya at the AVC office to work with Professor Artak Hambarian, the dean of the Engineering Department at the  American University of Armenia (AUA). I started thinking about the different type of projects that they might have for me and what kind of work I would be doing during the four and half months. My mind started to wonder away; I started day dreaming about all the adventures that I’m going to have with my friends, Saro and Tigran whom I had missed so much. I thought of visiting Artsakh for the first time and my heart immediately started to pound; little did I know, I would be visiting Artsakh twice during my 18 week stay in Armenia. I thought of how it would be and painted a picture in my mind, when suddenly I felt my chest being pushed back into my seat and short moments later the plane was off the ground. Half way through the trip I was overwhelmed with strange feelings. At first I was excited about landing in hayrenik, but my excitement slowly dissipated.  It felt like I wasn’t going away to Armenia, it felt like I was returning home from a faraway place. I was puzzled. That wasn’t how I felt the first time I travelled to Armenia. What had happened? Where has all the excitement gone? I didn’t find the answer to that question until I actually arrived in Armenia. Still no excitement, I was “just happy to be home” is what I responded to the question “how do you feel?” from my childhood friend of 19 years,  Saro, who was picking me up from the airport. I didn’t know at the time why, but I never have a higher sense of belonging than when I am in Armenia. I don’t feel that way about any other place, not even for the country in which I was born and raised, nor the place I currently live in, which I’ve been residing in more than half my life.

Ten hours after I landed, I had to wake up by no choice of my own. It was 5:00AM and I was heading to a military base with my friend Saro. I promised him that I would take photographs and videos of him parachuting out of a helicopter. We got to the base at 7:00AM. It was a bit chilly and rainy, so I had my winter jacket on. We stepped out of the car and the first thing I saw was mount Ara staring back at me. It was rather wide and had several peaks, I closed my eyes and I took a deep breath. The fresh smell of thyme (uorts) filled my lungs; that was my first nostalgic moment in Armenia since 2008. 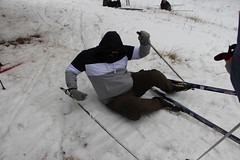 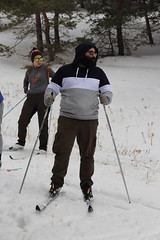 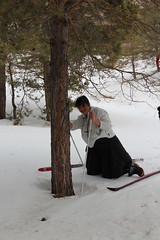